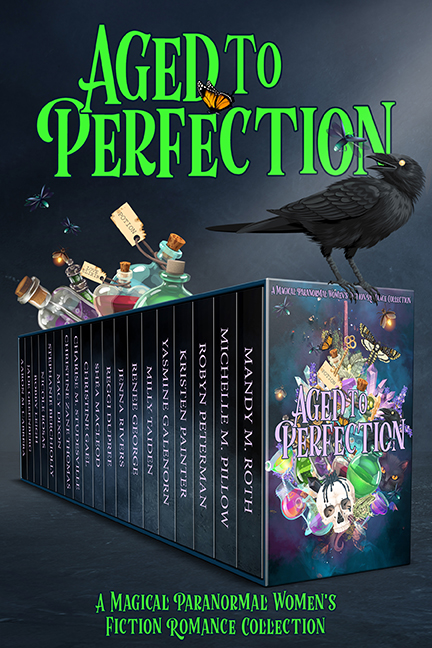 Featuring 19 all new tales spotlighting women forty and over having the time of their midlife.

Those aren't gray hairs, they're strands of glitter letting the world know you're fabulous. So adjust your crown and join us as we celebrate women who are fabulous, over forty, and aged to perfection in this magical paranormal women's fiction romance collection. Includes stories from some of today's top PWF authors, NY Times and USA TODAY bestsellers, as well as new emerging voices in the genre.

Edwina Gale is used to tracking down supernatural bad guys, but when her romantic weekend is interrupted by the murder of a drag queen, can she solve the crime before an innocent person is convicted?

Mandy M. Roth--Running with the Devil

When a gubernatorial candidate comes through the doors of a small magic shop, claiming he was mystically framed for murder, a witch has to decide if she can put their past behind her and help.

Tamara, a mere mortal, desperately enlists the help of a self-proclaimed ghost hunter when an age-old curse begins claiming the lives of her supernatural siblings.

A forty-something Shifter supermodel, five supernaturally screwed-up bridesmaids, and a demonic mother of the groom determined to ruin the wedding. This marriage is going to Hell. Literally.

This story contains vampires, kissing, cats, and shape-shifting secret agents. What else do you need to know?

Paranormal investigator and witch January Jaxson, and her wolf-shifter boyfriend Killian O’Connell, take a vacation for Valentine’s Day and find themselves in a search for their hostess’s missing sister.

Jenna Rivers--Spell of a Time

A newly single woman recovering from betrayal discovers no one is who they seem in Hoodoo, Texas—especially her new dog.

When she strikes a deal with a nefarious stranger to save her granddaughter’s life, Inez Walthrop is dragged into a world of werewolves, vampires, and monster-hunters that she thought only existed in her nightmares.

Charise M. Studesville--The Perks of Being A Hoodoo Rose

In a small Midwestern town, one sister takes over the family hoodoo business and must break a centuries-old hex that threatens to prevent the women in their family from finding lasting love.

A second chance with a first love comes with a ghostly price.

A force of nature unto herself, Florebelle Fairfield, must face a magical destiny she was never prepared for.

A last-minute whirlwind trip changes everything this forty-two-year-old thought she knew about herself and life.

When emotions heat, so does she.

One intoxicating New Yorker, a lifelong curse, and a splash of magic make an unforgettable midlife cocktail.

After inadvertently summoning a demon, Jinx must now stop the evil that possessed her best friend from killing her ex.